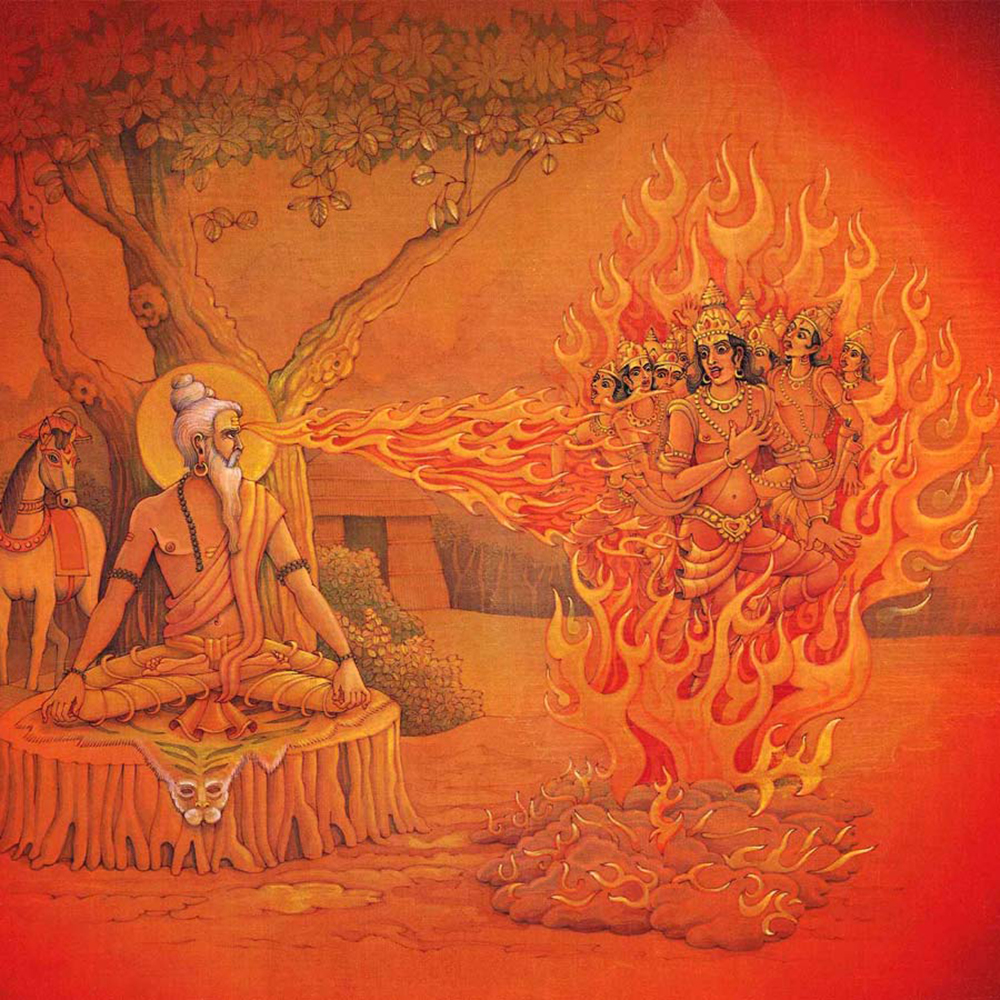 The myth of Gangasagar is all about the tryst between the circle of life and death and the allure of Moksha. And the heart of this devotional destiny is the iconic Kapil Muni temple. According to the Bhagavat Purana, Maharishi Kapil Muni (or Sage Kapila) was born to Sage Kardama and Devahuti, daughter of Svayambhuva Manu, ruler of the earth. Kardama Muni, while adhering to the words of his father, Lord Brahma, dedicatedly performed severe austerities. Pleased with his dedication, Lord Vishnu, the supreme soul, appeared in his divine form. In ecstasy, Kardama Muni praised the Lord’s magnificence. Pleased, the Lord asked him to marry Devahuti and prophesied that they would have nine daughters and, in time, fill the entire creation with living entities. And he would take birth as an avatar and teach Samkhya philosophy to the world. Kapil Muni, in his early years, attained an unfathomable knowledge of the Vedas and immortalized Samkhya philosophy.

Now, on to the legend of Gangasagar. "Raja Sagar", or "Sagar Raja," the ancestor of Lord Ram and ruler of the Ikshvaku dynasty, decided to perform the Ashwamedha Yagya as directed by Sage Aurva. It was believed that performing 100 Ashwamedha Yagyas would help one gain dominion over the entire earth. Lord Indra (the King of God according to Hindu mythology), the only one to complete the 100 Ashwamedha Yagya, feared that he would lose his ascendancy to a mortal, and hid the sacrificial horse near Kapil Muni’s hermitage.

Seething with anger, Sagar Raja sent his 60,000 sons (Sagar Putras) to locate the missing horse. The Sagar Putras decimated everything in their path and reached Sage’s ashram. Upon discovering the horse, the Sagar Putras mistook the sage for the thief and started hurling abuse at the meditating sage. The ensuing commotion hindered Sage’s tapasya. Enraged, Kapi Muni opened his eyes and blazed the 60,000 Sagar Putras into ashes, condemning their souls to hell.

Years later, Angshuman, Sagar Raja's descendant, discovered the horse still standing at Kapil Muni's ashram. He performed austerities to please the Sage. Content with Angshuman’s effort, the sage gave his permission to retrieve the horse and learned that the souls of his ancestors could only be freed after performing Shraddhas with the holy water of the Ganges. Although Raja Angshuman and his son Dilip were unable to complete the Shraddhas because Agastya Muni had drunk all the water from the ocean due to a severe drought.

A generation later, King Bhagirath, undertook the task of freeing the condemned souls and prayed to Lord Brahma, the creator, to free his ancestors' souls. He asked him to pray to Lord Vishnu to allow the holy Ganga to ascend on earth. Upon agreeing, he cautioned that the sheer force of the Ganges would wipe out the entire creation if it went unchecked and asked him to pray to Lord Shiva. Shiva agreed to bear the entire force of Ganga on his matted hair. In the meandering labyrinth of Shiva’s hair, Ganga lost her brute force and descended to the earth, gently caressing all existence. Bhagirath was finally able to perform the last rites of his ancestors, liberating the souls from the fires of Patal Lok.

With passing years, the myths turned into legends, legends into stories, and stories into beliefs. The Ganges was also given the name Bhagirathi, after Raja Bhagirath, and the sea got its name "Sagar," after Sagar Raja. And the island, Sagardwip.

Keeping faith in this mythology, millions of pilgrims from across the globe visit the Gangasagar Mela during the freezing hours of Makar Sankranti in search of Moksha. A dip in the holy water is thought to wash away all sorrows and sins. With this belief, millions visit the Kapil Muni ashram, chanting the hymn "Sab Tirth Bar Bar Ganga Sagar Ekbar."